A month or so ago we a received a pamphlet telling us our local bus service – Birkenhead Transport – would be ceasing the use of 10-trip bus tickets and entering the modern era by becoming part of Auckland Transport’s ATHop card system. With the ATHop, you buy a card, load it up with money and top it up “easily” online when it gets low.

I thought ‘great, no last minute car trips to get a bus ticket the day before school’, or rummaging for coins to catch the bus. Two of our family catch the bus – the teenager catches it to and from school if he can’t cadge a lift with a mate; and the husband catches it to the university every day, and home. Life would be so much simpler. Or so I thought.

We bought two cards, $5 each during a special period, thereafter $10, and topped them both up. I noticed 25c was deducted for topping up each which seems a bit ridiculous but nothing to lose sleep over I guess; it just means you should top up for a lot to reduce the “service charge”.

You then go to the website to register the cards but as the website was a bit confused over the fact we had two cards, I called AT and got a very helpful chap who linked the family’s two cards on the one account so now we can log in and see both in the same area.

That is where our happiness ends.

The amount on both cards was quickly reduced so I logged into athop.co.nz at 9.30am on Monday July 29 and topped up the husband’s card. It warned me that it “could take up to 72 hours” to show the balance. It seemed an awfully long time so I also set up an auto-top on his card so that if it ever fell below $10 it would top up by $40 (forward planning I thought). I did both transactions on the morning of July 29. I also assumed the 72 hour thing was like a “best before date” where you are given the worst case scenario so that if the supplier does anything better you are truly grateful.

I decided to call the  ATHop people. I know it’s not the people on the end of the phone’s fault, but I wanted to to tell them it had been almost 72 hours and still no funds on the card.

Pleasant woman, repeated the same line over and over. “With the ATHop card it can take 72 hours. It does say that on the website”.
“Yes I know, but it’s ridiculous! Where does the money go?”
“I’m not sure,” she said. “That’s just how long it can take with the ATHop card, 72 hours.”
She asked me if I was logged in to the site now which I was. “Does it say pending transactions?” Yes it does I said. The transaction is showing the deposit occurred on the 29th but that’s not reflected in the balance and it’s now August 1.
“Yes, well with the ATHop card it can take 72 hours.”
Yes, yes it can. I think I got that.
Then she remembered something.
“Well the amount on the card won’t show online until you use the card on the bus.”

What?
“You have to tag on and once you have used the card it will then show you your balance the next time you log into the website.”
“So you have to go through the embarrassment of the card maybe not working on the bus to find out?” I asked.

(I know my husband HATES things like that, he’s not the type to brazen out a declined eftpos with a “oh the wife must have been shopping” like I’ve heard others do.
“Well you should make sure you have some cash with you,”she said helpfully.

So I texted him this evening to tell him to try it on the way home. As by now it has been 78 hours, there’s a chance it could work I say, adding he should of course “have some cash on him”.

He tries it  and gets the Wehhh-Worrrr sound of rejection from the bus card reader. It’s loud, it’s embarrassing and he doesn’t like it. He pays cash and does the walk of shame to the back of the bus, slinking as best a 6″4 man can do.

But wait! He isn’t alone.
He hears at least two more people get on after him, and getting the Weh-Woor beep. One passenger loudly proclaims in anger “But I topped it up MORE than 72 hours ago, this is ridiculous!”

Yes it is ridiculous. Let me tell you the reasons why.

* how in 2013 can either of those electronic transactions take 72 hours, either the credit card or the direct debit from our bank account (which I am now fearful about, who knows how much they will take and when?)
* I can pay an online store in Hong Kong and have my parcel sent the same day and it arrive in four days.
* When I transfer funds to any other account, I expect to see them show up online the next day and not to have to buy something to be able to see my balance! Banks make transfers on the hour these days.
* I am paying 25c to top up each time.
* The website is unstable. Half the time you can’t get in. It’s even worse on ipad. You log in and EVERY time it logs you out and makes you do it again. When you do get in on a PC, 1/4 of the time you can’t see your balance. AND the error message spells “occurred” incorrectly as “occured”. There’s no cure in this I can assure you.
* There is no explanation as to WHY it takes so long or why my money goes into a vacuum.
* The temptation is to load up the card with funds so you don’t have to load it and wait… but that’s not so smart. If it takes 72 hours to see money appear on it, how long would it take to cancel it?

So much as I hate to admit it, the teenager is right this time. Best to bludge a ride with a mate rather than catch a bus. It’s just too hard. 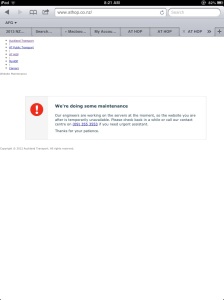 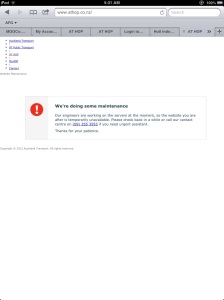 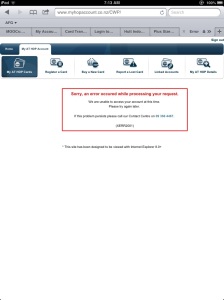